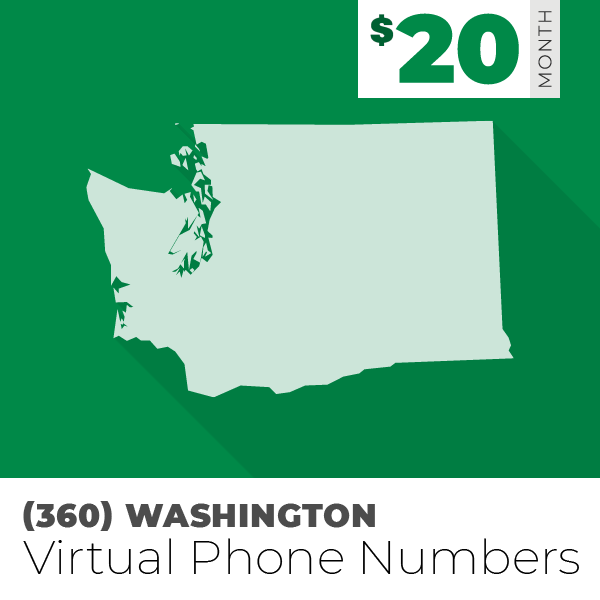 We offer one plan that includes every feature for $20 a month. We don't believe in locking features that you need behind a higher tier plan. We believe everyone should always receive every feature we offer at one affordable price.

Get a second phone number on your cell phone for your business. No additional hardware is required.

$20/month. No Contracts. No Additional Fees. Cancel Any Time.

Quick Facts About Our Service

Benefits of a Business Phone Number

Have dedicated voicemail boxes for your business line

When your business is closed for the day, have your calls go to voicemail

Highly Rated By Our Customers

Are Other Washington Area Codes Available?

Yes, in addition to Washington's (360) Area Code numbers, we have numbers in many of Washington's local area codes. We also have numbers for many area codes throughout the U.S. Our inventory is updated constantly with new phone numbers, even in the most popular area codes. You can see the available numbers for any area code at any time by using our "Find Your Number" feature, located on the top of every page. We hope you find the perfect number for your business! If you need help selecting a phone number, feel free to let us know, and we can help you find a business phone number.

What Is a Virtual Phone Number?

I Already Have a Business Phone Number in The (360) Area Code. Can I Move My Number to GBPN?

Yes, you can transfer your number to GBPN. The process of moving or transferring a phone number is called "Porting." There will be no charge from us; however, your existing provider may charge you a fee. Please see our phone number porting page to learn more.

What Is a Vanity Phone Number?

What Kind of Installation Do I Need for Your Service?

You will need no additional hardware and no installation is required. You will use your existing cell phone. Our business phone number service operates through your existing internet connection.

For answers to other commonly asked questions, please visit our FAQ page.

Area code 360 was established in 1995 after area code 206 reached its capacity for the first time. One of the two first area codes to use a middle number other than 0 or 1, was 360 and one in Alabama established on the very same day. In 1995 area code 360 included more than the current service areas and 206 was reestablished in some areas of protest making the creation of two additional area codes necessary. This area code is one of the first to include areas that are not geographically contiguous. The areas range from northern borders down to the southern border with Seattle areas in between. The cities in the 360 service area are Battle Ground, Aberdeen, Anacortes, Arlington, Bellingham, Bremerton, Burlington, Camas, Centralia, Chehalis, Enumclaw, Ferndale, Forks, Kelso, Longview, Marysville, Mount Vernon, Oak Harbor, Olympia, Point Roberts, Port Angeles, Port Orchard, Port Townsend, Poulsbo, Raymond, Sequim, Shelton, Silverdale, Snohomish, South Bend, Stanwood, Vancouver, Washougal, Whidbey Island, Woodland, and Yelm.

Learn more about each of Washington's area codes.

Popular Cities In The (360) Area Code

Cancel At Any Time. No Contracts. No Additional Fees.

Save $5
Get Started
Best Value

Save $20
Get Started
Live Chat